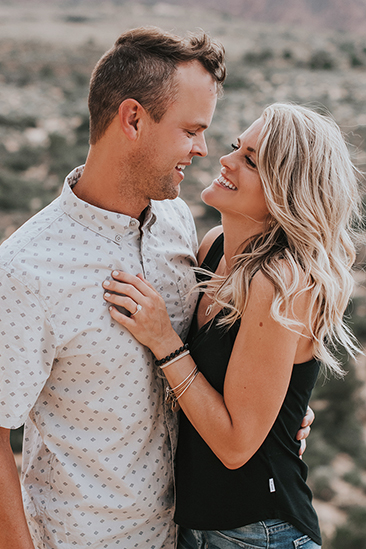 Our story of how we met is nothing romantic, but rather simple and quaint. In spring 2016 I was helping create website content for a brokerage where Jared works. He reached out to me and we spent time talking and getting to know each other which led to our first date. It was perfect weather, so I suggested dinner and a hike. Cheesy as it sounds we connected instantly, talked through the night, and could not stop smiling. Our cheeks were hurting and a deep chemistry quickly embedded in our hearts.  It was Jared’s energy that imprinted on me and I just wanted his energy all the time. Fun fact: I wrote a song for him a week after meeting; I composed it and sang it to him.

Jared revived my heart and I felt such a strong sense of assurance that this man was to play a part in my life. With all things there is a purpose and season for everything. Our courtship was shortly lived and I could see our season ending. We said goodbye and took different paths. Looking back I can see now, how Heavenly father’s plan played a part in that decision. I’m grateful for the season I had with him.

Fast forward to early 2018 our paths crossed again, our timing aligned, and my heart became immensely grateful for a new season with him.  During this year of dating, we took a deeper appreciation of one another and built a strong foundation that led to weathering all the seasons of life together.